ABOVE: an artist's rendering of converting the L.A. River from concreted to natural


IT'S YOUR MONEY--THEY'RE YOUR CREEKS!

The people who will have to pay for this $20 BILLION project, we taxpayers, can tell our elected officials that we want a natural parks- and wildlife habitat-creating plan to clean up our polluted beaches and creeks.


THIS WEBSITE IS SPONSORED BY FRIENDS OF L.A. CLEAN CONNECTED CREEK TO PEAK PARKS,
A CALIFORNIA 501C3 NON-PROFIT CORPORATION

Our Vision for the Next ten Years

COME LEARN ABOUT THIS MASSIVE PROJECT. FIND OUT HOW YOU CAN MAKE IT BETTER FOR L.A.'S NEIGHBORHOODS AND FOR PARK USERS, NATURE LOVERS AND TAXPAYERS 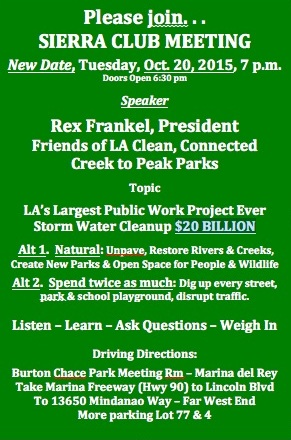 Rex Frankel will speak about the largest public works project in Los Angeles' history, the $20 Billion beaches, rivers and creeks stormwater pollution cleanup plan (known officially as the Enhanced Watershed Management Plan). This plan will have huge impacts on every river and creek in our County. Two proposals are under consideration. Frankel will describe the two plans: one uses natural methods to clean up water pollution by unpaving, expanding and restoring our County's rivers and creeks and planting natural pollution-filtering vegetation. The side benefit of this plan is the opportunity to convert concrete, fenced-off storm drain channels into park greenways with trails and bike paths which will connect L.A.'s existing ring of mountain parks that surround our developed metropolis to our communities in the flatlands. For example, what if Ballona Creek's nature trails extended all the way to Griffith Park, as they once did?

This greenway plan has had many names through the years, starting first with the Olmstead Plan, https://www.flickr.com/photos/cityprojectca/sets/72157601130687757/
then the Rim of the Valley plan, http://ballona-news.blogspot.com/2015/05/what-l.html , and also the Mountains to the Sea plan and the Emerald Necklace.

However, elected officials so far are favoring a plan that will not acquire and create new parks, but will instead require the digging up of virtually every street, park and school playground in order to construct water capture and filtration facilities for this pollution. And it will cost $20 BILLION in tax dollars over 20 years to construct, according to the County's planning department report. This plan has been also estimated by the L.A. County Public Works department to cost twice as much as a "natural" plan.  The Los Angeles County Board of Supervisors and the L.A. City Council early this summer endorsed the no-new-parks plan with virtually no public notice. Frankel's organization, the Friends of L.A. Clean, Connected Creek to Peak Parks, has filed a lawsuit to overturn these quiet approvals and to require a full revealing of the costs and impacts to our communities.

YOU CAN HELP CHANGE THIS PROJECT!

However, the final decision has not been made! An additional government agency must approve the plan before it can happen. (The Los Angeles Regional Water Quality Control Board, which has previously endorsed a "natural" cleanup plan, will make its decision at a public hearing in Spring of 2016.) The people who will have to pay for this project, we taxpayers, can tell our elected officials that we want a natural parks- and wildlife habitat-creating plan to clean up our polluted beaches and creeks.


THE BATTLE IS NOT OVER. SEND EMAILS TO L.A.'S REGIONAL WATER QUALITY CONTROL BOARD. TELL THEM TO CONTINUE THEIR SUPPORT FOR THE “NATURAL” EWMP PLAN. TELL THEM TO OPPOSE THE PLANS ENDORSED BY THE L.A. COUNTY AND LA CITY GOVERNMENTS

Posted by Rex Frankel at 9:13 AM No comments:

What It's All About

...Few know better how hard it is to unpave paradise than Rex Frankel. As director of the Ballona Ecosystem Education Project, he has long fought — futilely, in some respects — to preserve the Ballona Wetlands, 90 percent of which has been compromised by development. He has come to realize that the Ballona Wetlands’ health would improve if the county and city could fix the urban-runoff problem. And so he has also worked hard to put together the numbers to demonstrate that daylighting creeks and restoring wetlands may actually make financial, as well as environmental, sense.

The way Frankel sees it, Los Angeles has three options available to it for cleaning up pollution caused by urban runoff. It can install small-scale systems that capture as much pollution as possible close to its source — filtration devices that either stop garbage from flowing downstream or divert water to existing parks where it can percolate into the ground. “That’s the city’s one,” says Frankel. “They think it’s the cheap way of doing it.”

The second option, also proposed in the city of Los Angeles’ Integrated Resource Plan, is to divert the water to regional treatment plants, facilities that will treat urban runoff like sewage, and cleanse it of nutrients before it hits the beach. “And the third way,” he says, “is to unpave our rivers as much as possible, acquire any potential vacant land along the rivers and use them as part of an expanded green-space network.”

Frankel, a boyish-looking 42-year-old, almost always dressed in short-sleeved shirts and shorts, sits in his office on L.A.’s Westside where the walls are lined with maps — maps of the Los Angeles basin, of the Ballona Watershed, of a proposed greenway system that would connect all of the local area’s open space with contiguous parks, daylighted streams and restored wetlands. “You can’t stop the public from doing dumb things,” he says as he talks about the reasons individual efforts, though crucial, aren’t enough to solve our pollution problem. “Our existence every day produces trash and pollution, and the most concerned citizen can’t always prevent it. You need a system that’s a fail-safe to deal with it. You can’t count on education; you’ve got to have the infrastructure. And it’s going to be incredibly expensive to do it either of the first two ways.”

The first option is based on the city’s proposal to use some 30 publicly owned sites to reclaim water and use it for landscape irrigation around the region of Los Angeles known as the Santa Monica Bay Watershed — Venice, the Los Angeles Airport area, Pacific Palisades and El Segundo, from which all runoff drains into the ocean. It’s a nice idea, says Frankel, but according to his calculations, “They were only capturing about 2 percent of the runoff that the city says it needs cleaned up to meet Clean Water Act standards. The number of days they’d violate health regulations wouldn’t decrease at all.”
By the city’s own estimates, the project will cost $30 million. “If that’s $30 million to clean up only 2 percent of the runoff,” says Frankel, “that means you have to multiply that $30 million by 50 to get 100 percent compliance [with EPA standards].” On top of that, the Santa Monica Bay Watershed constitutes only 10 percent of the land area in the city of L.A. “So you have to multiply that cost by 10,” says Frankel. “That means that to enact this plan for the whole city would cost $15 billion.”
Treatment plants, he estimates, could come to $15 billion too. “It’s not just the treatment plants,” he says, “it’s getting the water to the treatment plants. You have to do a lot of digging up of old systems and building new ones.” An underground water tank, or cistern, costs $1 to $1.50 per gallon. “So if you wanted to catch the city’s entire runoff, the amount to comply with [EPA rules] would be $14 billion.”

For that money, however, Frankel admits, “You’d also add another 9 percent to the city’s water supply.”

But to Frankel, that’s not necessarily such a good thing. “Isn’t that giving every developer in the city a water permit? The only thing stopping developers from going crazy is that Los Angeles doesn’t have enough water to accommodate all their plans.”

“And in this case,” Frankel continues, “river restoration pencils out to the most economical choice.” It is expensive — he suspects it might be more than $15 billion. Daylighting streams and restoring wetlands would mean buying huge tracts of private property, ripping out its impervious surfaces and making sure those waterways have room to flood. “But once you’ve spent the money to acquire the land,” Frankel points out, “it’s self-maintaining. Unlike a treatment plant, it doesn’t require power and tens of millions of dollars to maintain. If you’re just worrying about your taxes, this is the best deal. Even the Coalition for Practical Regulation people, if they saw the viability of the river-restoration approach, they wouldn’t oppose it. And think of all the parkland we’d create!”

Any way you do it, Frankel says, “We’re facing the biggest public-works project in the history of the city. You’re basically retrofitting a city that was developed in the wrong way. Los Angeles was not planned by visionaries. Back East, people knew they could neither pave over the streambeds, nor channelize streams; there was just too much water. Here, because the creeks were either dry or flooded so much of the year, we just said, ‘Screw it. Let’s get rid of them.’ ”

Frankel knows he’s proposing a radical solution. “It’s about changing the way we develop in a way that creates more parks and cleans up pollution,” he says. “It’s retrofitting the city in an environmentally sound way, as opposed to engineering in the old way. I would love to see the politically courageous elected officials in Los Angeles advocate for the third way. They need to see it’s been as beneficial economically as I say it is.”
Posted by Rex Frankel at 11:07 PM 1 comment:

Rex Frankel
I write about saving cool hiking spots in California at http://rare-earth-news.blogspot.com CHECK IT OUT! I also lead hikes for the L.A. Hiking meetup group.